The Kings are low-key having a great off-season

2006. The last time the Sacramento Kings featured in the NBA’s post season. 11 seasons of being bound to the lottery has yielded little success. DeMarcus Cousins was a shining light but for a variety of reasons finds himself now in New Orleans after a late season trade. This trade pushed the Kings in a new direction, a direction that will hopefully return the franchise to the post season. A trade that set the tone for the Kings off-season so far, a raging success that has flown well and truly under the radar. We explore how they have done it and where they are heading.

There is no doubting that DeMarcus Cousins is an elite player in the NBA and arguably the best centre in the league. But there were problems with him and management that ultimately led to Vlade Divac opting to go in another direction. It finally gave the Kings clarity on where they were heading by gaining valuable, young assets and freeing up cap space in the process. The assets they received in return were the college scoring machine in Buddy Hield, Tyreke Evans, Langston Galloway along with a 2017 first & second round pick. Galloway was waived straight away and Evans has since walked to the Memphis Grizzlies, in the process freeing up $10.2 million in cap space. Hield has adjusted nicely in Sacramento and is a player who is suited to the modern game with his ability to shoot the ball.

The Kings entered the draft with two picks in the first round, no.5 and no.10 but decided to flip pick number 10 to the Portland Trailblazers for picks 15 and 20. With no obvious choice at no.10 and a relatively deep draft crop ahead, making the trade was a smart move by Kings management. At number 5 the choice though was obvious and the team got the man they wanted all along in De’Aaron Fox. Fox is a super talented point guard with explosive pace, quick hands on defensive and ability to create in the open floor whether scoring or passing. With pick 15 they went for North Carolina Junior, Justin Jackson. Jackson is a solid wing option with great size, rebounding and improved range from beyond the arc. Somewhat of a safe option here but someone who has shown strong work ethic in improving his jump shooting and is coming from a winning culture in North Carolina. At number 20 they went for the once highly touted, Harry Giles. Just a couple of years ago Giles was seen as the number 1 prospect in this draft crop but after a series of knee injuries found himself playing limited minutes in his freshman year at Duke. A swing for the fences at this pick but by playing it safe at pick 15 with Jackson they afford themselves to take a punt on a player like Giles. If it comes off and Giles can get his body right he will be a steal at 20 plus a player that can provide plenty on both sides of the ball.

An explosive point guard with strong instincts, a ready to go SF with the ability to score the basketball and a once highly touted big man prospect show a strong haul from the Kings at the draft table. They also secured highly rated Kansas point guard Frank Mason III in the second round. Reports also suggest that all of their recruits display strong intangibles and quality work ethic, characteristics that have for long been lacking in Sacramento. 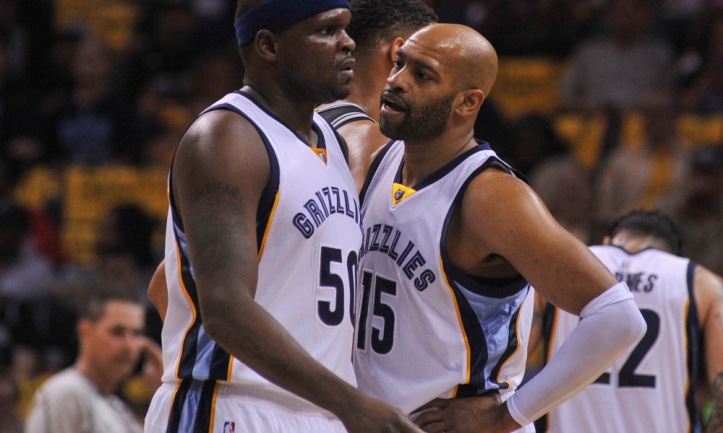 George Hill, Zach Randolph & Vince Carter. Aged 31, 35 & 40 respectively. Looking from the outside it may seem foolish to offer players like these three large contracts when the roster is trying to develop a fresh, young roster. But these veterans have been brought in to mentor the young core and teach them how to be successful in a league that is constantly tanking to get better. The fact that all three contracts were no longer than three years long also indicates that their time will be short lived. They can get in, mentor the young guns, provide a form of competitiveness for a couple of years and then move on leaving the Kings with plenty of flexibility with their cap space.

George Hill is coming off his best offensive season in Utah where he averaged 17 points per game on over 40% from beyond the arc. He can also defend and will bring a wealth of knowledge to young point guards De’Aaron Fox and Frank Mason III. Starting his career in San Antonio he learnt from a multitude of hall of famers before being traded to the Indiana Pacers where he enjoyed a number of successful post season runs. Last year in Utah was his one and only season in Salt Lake City but he was integral part of a team that reached the second round in a tough Western Conference.

For so long a staple of the Memphis Grizzlies franchise, Zach Randolph joins the Kings on a two year deal where he can help mentor a talented group of young bigs in Skal Labissiere, Willie Cauley-Stein, Georgios Papagiannis & Harry Giles. Randolph’s toughness has been a hallmark of his career and the Kings will be hoping that some of it rubs off on the aforementioned quartet of players. Starting his career in Los Angeles, Randolph was seen as a bit of loose cannon both on & off the court but has since transformed himself into a role model whilst in Memphis. Another strong character trait that will help build a winning culture in Sacramento.

Once dubbed ‘half man, half amazing’, Vince Carter joins the Kings on a one year deal but is no longer half amazing. The highlight reel dunks have faded but Carter will still have plenty to offer the Kings even if for just one season. His expansive experience in the league will be of value to young shooting guards Buddy Hield and Malachi Richardson. Plus he his loved by his peers where ever he goes so he should be able to have a positive influence over the locker room that will help foster a winning culture.

Final Verdict: The Kings are finally heading in the right direction. Moving on from the Boogie Cousins era was a step in the right direction. Adding three quality young players through the draft in Fox, Jackson & Giles to an already developing young core of Labisserie, Cauley-Stein, Hield & Richardson gives them plenty of scope to develop a strong roster. Fox looks like a sure fire thing and Hield has shown top level tendencies. Labisserie and Giles could be anything whilst Cauley-Stein looks solid if not spectacular. Bringing in a trio of veterans in Hill, Randolph and Carter on short term deals signals that the Kings will be using them to primarily mentor the youngsters and develop a winning culture. Their short term contracts also leaves room for flexibility in the cap to sign bigger free agents or lock up a young gun on a long term deal.