The Conference Finals are upon us, mock draft discussion is heating up and some heat has landed on an MVP candidate. Catch up on all the hot topics in the basketball world with the fast-break..

The Spurs at the time held a commanding 21 point lead over the Warriors in a result that looked set to shake up the playoff picture or at least make the series interesting. From then on the Warriors went off a 19-2 run that closed the margin and ultimately led to a 113-111 Game 1 victory. It underlined the importance of Kawhi Leonard on this San Antonio team. Yes they were able to completely dominate the Houston Rockets without him in Game 6 but the let’s get serious the Rockets are not the Golden State Warriors. Early reports suggest that Leonard will be a game-time decision for Game 2 and if he can’t return soon, this series may be over before it starts. Stephen A. Smith suggested on Friday that if Leonard missed the entire series then the Warriors would cruise to another series sweep. Going off the events in Game 1 it looks like he may have a valid point.. 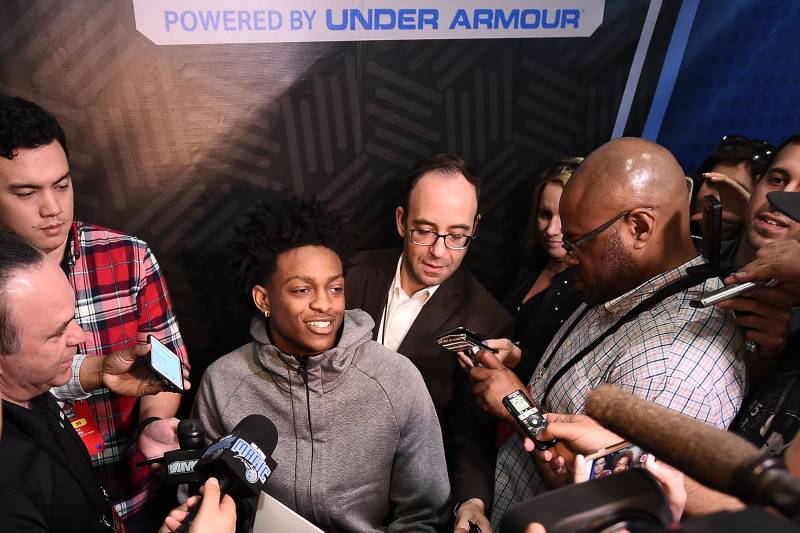 For the majority of the season, Markelle Fultz and Lonzo Ball have been the consensus 1 and 2 picks in the upcoming draft with NC State’s Dennis Smith also attracting plenty of attention. But reports are brewing that Kentucky point guard De’Aaron Fox may have moved past Ball and Smith into the no.2 or 3 pick. Fox’s performances against UCLA during the season compared to that of Ball’s were chalk and cheese, something NBA recruiters may be taking notice of. Fox is an elite defender with great speed and athleticism when attacking the basket. On the other hand Ball is an elite passer with great range from outside. It will really depend on what type of point guard a team needs at the given time.. or whether they want to deal with LaVar Ball in the foreseeable future.

To say that the Wizards and the Celtics don’t like each other would be an understatement. In January the Wizards arrived for a game against the Celtics all clad in black, hinting that it would be a funeral for the C’s. Boston returned the favor prior to Game 6 before John Wall ensured the Wizards survival with a game winning three. It hasn’t just been the all black wearing antics that have caused drama in this series with a number of on-court scuffles making sure that tensions have run at a premium. With a trip to the Eastern Conference Finals on the line in Game 7 expect more of the same in what is sure to be a gripping contest. Prediction: Wizards 103-100

Pretty bad, in fact awful. It was Game 6, win or go home and James Harden failed to show up in the biggest game of the Rocket’s season. He is a leading MVP candidate and based on statistics he has every right to be but the statistics from Game 6 aren’t great viewing. The Beard shot 2 for 11 from the field for just 10 points and turned the ball over six times whilst committing six fouls. This coming from a guy who had an historically great season on offense in a game that would define his plus the Rockets entire season. What made it worse was the fact that it was on the Rocket’s home floor against a side without their best player in Kawhi Leonard. The stench from this performance will stay with Harden over the summer and will linger in the mind’s of NBA fans for a lot longer.

Many fans and experts alike have suggested that a third meeting between Golden State and Cleveland in the Finals is a negative thing. Yes we know it’s coming but why does that make it bad? They are clearly the two best teams with historically great players on both sides. It continues to add to the rivalry that could become something like those of the Boston and L.A teams in the past. Surely that is a good thing! Plus if it is anywhere near as good as the Finals last year we will be more than satisfied. And as long as these two teams keep their rosters intact I dare say that this won’t be the last time we see them face off together in the Finals.